NOTICE: The wearing of masks are no longer required to enter BMCC properties. However, sanitation stations (masks and hand sanitizer) will remain at each entrance.

Bay Mills Community College (BMCC) was chartered by the Bay Mills Indian Community (BMIC) in 1984, to meet the training needs of the Tribe’s growing workforce. From very meager beginnings, BMCC received initial accreditation in 1995, and today is a fully operating Tribal College and Land Grant Institution with an open admissions policy for students of any race, creed, color, and national or ethnic origin.

BMCC is one of three tribally controlled colleges in the State of Michigan, and the only community college in Michigan’s Eastern Upper Peninsula; it is committed to providing affordable, culturally relevant, accessible, and high quality educational opportunities to all tribal communities in Michigan and their neighbors.  BMCC is also committed to providing leadership in the areas of economic and community development for the Bay Mills Indian Community and Eastern Upper Michigan.

Control is vested in a Board of Regents, which elects the officers of the Board and establishes overall institutional policy.

Bay Mills Community College’s President and CEO, Duane A. Bedell, reports to the Board of Regents and provides leadership for all College operations.

Mr. Duane A. Bedell assumed the presidency of Bay Mills Community College, Brimley, Michigan in 2021.  Previously, he served as Tribal Manager for the Bay Mills Indian Community for the period of 2018 to 2020.  Prior to his service as Tribal Manager, Mr. Bedell worked as a full-time faculty member while serving as the Computer Information Systems, Medical Office, and Office Administration Chair between 2008 and 2018.  Mr. Bedell also served on several committees such as the Curriculum Committee (member and chairperson), Faculty Development Committee (member), Marketing Committee (member), and the Computer Information Systems Advisory Committee (chairperson) during his previous tenor at Bay Mills Community College.

The Institutional Research Department is responsible for collecting and verifying data to ensure accurate information is being provided for internal use and external reporting. Transparency is an important piece of the relationship between BMCC and its stakeholders, potential students and their families, and other interested parties. Below is the statistical data representing the student profile, retention, and graduation rates overall and by demographics.

It is important that this data is well thought-out and understood. Some key definitions can be found in our Data Dictionary. For a more in-depth examination of BMCC’s data and reporting, please click on the link to visit the Institutional Research Department.

This information demonstrates enrollment overall and is not disseminated into full-time or part-time categories.

These rates are for students overall and are not distinguished by full-time or part-time status. 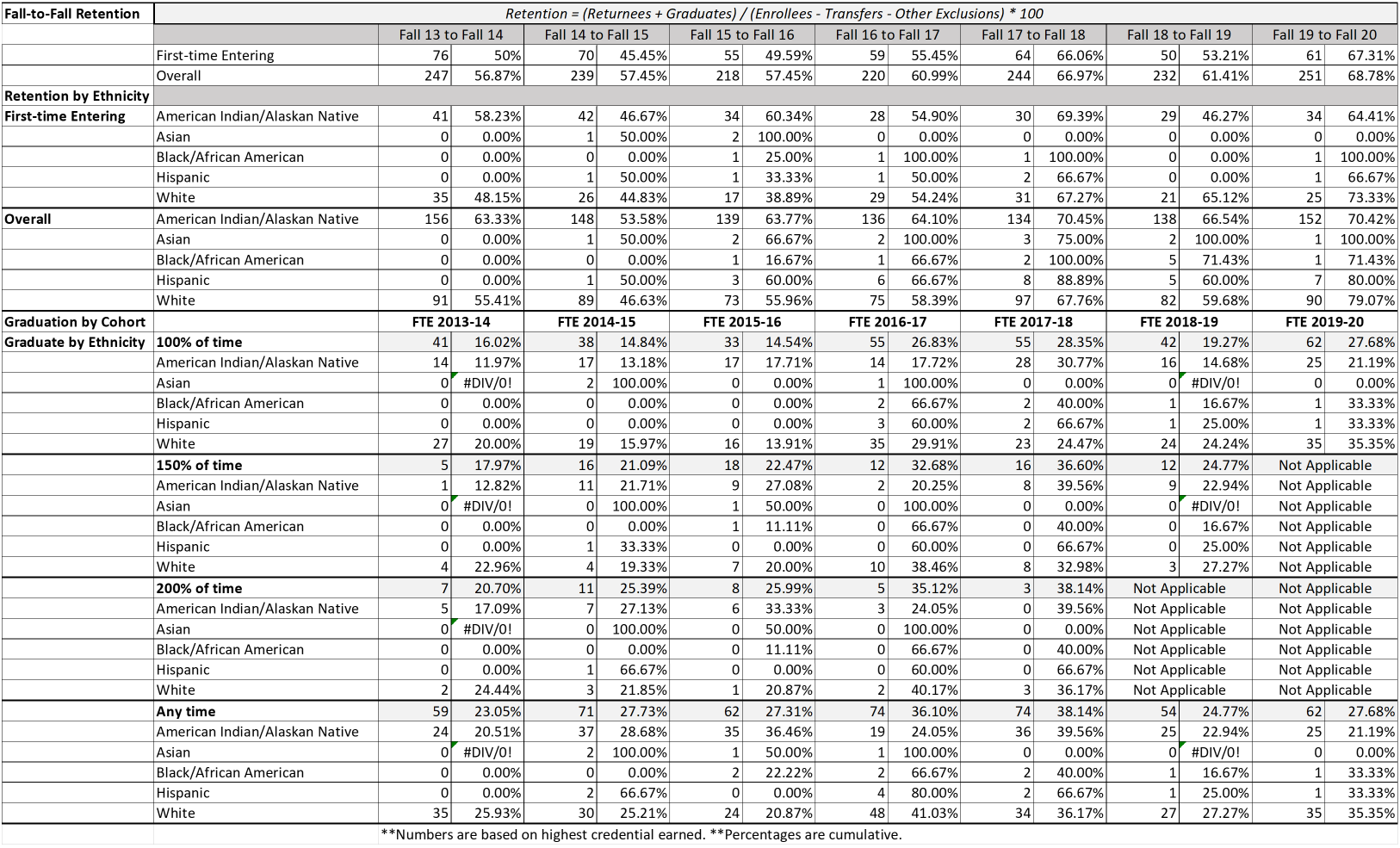 Current Student Costs at BMCC
*These costs are not set by BMCC and will vary based on individual student circumstances.
^These fees are estimated based on a student enrolled in 14 credits.